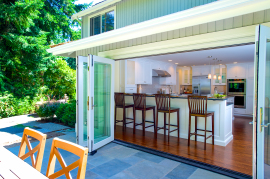 Good writers know how to keep you engaged with the story so you’ll want more, often leaving you on the edge of your seat with a cliff-hanging set up for the inevitable sequel. The result of our familiarity with the characters makes it easier to continue with a sequel than start a completely different story. The same can be said for home renovations.

Brent and Jill Smith purchased a house on English Hill in 2011 intent on updating the flooring, millwork and paint before moving in. Having experienced a similar interior update with their previous home in 2006, it seemed natural to employ Tenhulzen’s expertise to personalize their new home as well. Within the first couple years, Jill began having thoughts about expanding the kitchen. In late 2013, the Smiths interviewed 3 contractors to determine the best fit for designing and building what was to be the core of their home.

“Why two other contractors?”, I asked. “We wanted to be certain we were making the right decision for a project of this importance,” Brent responded. Jill agreed, “We trust your team, but just want to make sure our vision is met.”

I realized that their experience with the first 2 projects were like Star Wars Episodes 1 & 2: they kind of knew what was going on, but weren’t fully engaged in the details. Now that we were starting into a detail-rich project, Brent and Jill were not only hooked on having another sequel, they were helping to create the script.

The kitchen addition was completed on schedule and the dust had barely settled when Brent inquired about an exercise room addition. Jill wasn’t completely on board with the idea, favoring improvements to the bathrooms as her next items for improvement. We mocked up some ideas and let it simmer for a while. By early 2016, Brent had provided a 3-D model rendering of his vision for a 2nd story exercise room.

This 4th sequel provided challenging structurally and mechanically, to be functional yet aesthetically appealing. The project was half-complete when we showcased the kitchen addition on the Remodeled Homes Tour. Since access to the kitchen was through the construction zone, tour-goers were fascinated by the sequel-effect of seeing a renovation in process.

Last year, we performed 14 sequels resulting in the highest rate of repeat customers in a given year since 2009 https://tenhulzen.com/sequels-2016. It seems the Smith family is enjoying some time without construction, so may be a couple years until Episode 5: “Renovation of the Bathrooms”. 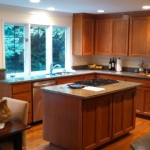 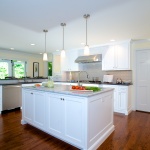 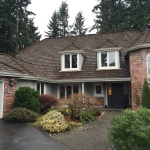 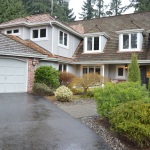