The MBA’s longest-standing community event and Tenhulzen Remodeling has been a ramp captain virtually every year since the program began.

Rampathon has grown from 5 ramps in 1993 to over 30 ramps per year. Each May, TR staff volunteer a Saturday and part of Sunday, depending on the complexity of the ramp to give residents in our community who are confined to a wheelchair, uninhibited access to the outside world.

It is a most satisfying feeling to know you have provided access for someone who has had to rely on others to lift them up and down stairs.

2017 marks the 24th ramp TR has provided our community.

Two ramps were built this year.  One in south Bellevue and one near downtown Issaquah. 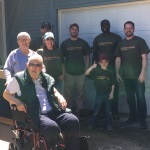 A 2-step ramp was built on-site for a former military officer suffering from ALS. Rob Captained this ramp, assisted by Ryan, Ronda, Jesse and Abbas. 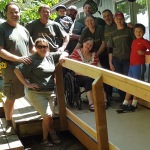 A 3-step ramp was captained by Brett with assistance by Chris, Jake, Steve, Trey, Ruth, Liz, Traci and Mike. The recipient was a 56-year old mother of 4 with a rare bone disease. 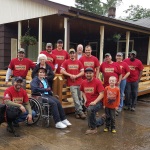 Our team completed this ramp for a woman in her 40’s who lived near downtown Snoqualmie with her parents. It is a 4-step ramp with a 90-degree turn at a landing built completely over a concrete driveway. Saws were set up under tents as is rained very hard that day.
This ramp replaced a walkway with 2 steps to the house and a half step to the driveway.  The L-shaped ramp was largely pre-built off-site so it could be set between landscaping foliage. Although the late 60’s walker-bound recipient was not completely immobile, this suited the long-term needs of the home.
This 1-step ramp in the garage was a relatively simple build and handled quite confidently but a team of 3. Due to constraints of the mortorized wheelchair operated by the young girl, side-mounted curbs were installed in place of railings. 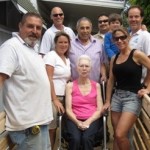 This 28 foot ramp in in Bothell was challenging because the only place it could go was into the garden area, requiring some significant relocation of prized annuals. Although our recipient was very emotional about being able to exit her home under her own power, there was some uncertainty about whether our carpenters were able to keep her plants alive. 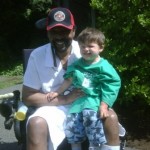 This ramp wasn’t really a ramp at all. A 140 foot dirt path was carved into the grassy area between 2 buildings by this Vietnam veteran. Instead of a wood ramp, we decided forming and pouring 7 yards of concrete would provide the best access to his house. The ‘walkway’ has a broom finish for slip resistance and pitches slightly for water run-off. 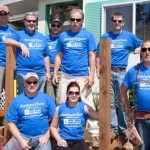 A relatively complicated 40 foot run requiring 2 landings was prepped on Thursday, poured on Friday and built all day Saturday and half of Sunday. When completed, the ramp was the first improvement to the structure since 1968, and the couple that lived there no longer required assistance leaving their home. 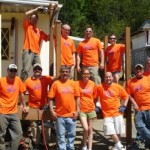 This Duvall residence received the longest ramp we have built to date. It was also built during a record-setting temperature in May. At 75 feet in length, it doubled-back on itself twice with 4 landings and 30 footings. Some of the neighbors came out to help and even brought our team frosty beverages and treats at the end of the day. 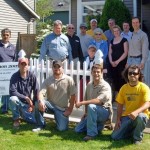 This Kirkland home is residence to a retired builder and honored past president of the MBA. Rather than build the ramp and railings to the specifications provided, we decided that the best solution was to replicated the picket fencing around the yard. Current MBA Executive Officer Sam Anderson was present for the completion photo. 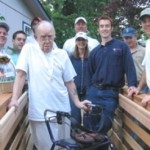 This 24 foot ramp was built for a retired surgeon who was spry enough to navigate with a walker. Fascinated by the construction process, he marveled at how our team worked together, lending a hand when safe to do so. When completed, he was proud to know the ramp would outlive him and possibly his live at home daughter. 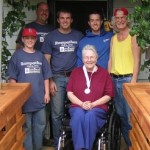 This 1-step concrete porch was too wide to simply have a ramp attached to it, so to enhance the house, our team built a porch with integrated ramp over the top of it. The wheelchair-bound recipient was suffering from arthritis in her lower extremities. A flush deck and ramp allows her to visit her garden and neighbors while her husband was at work. 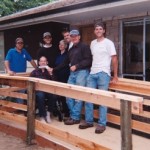 This retired Navy Commander is wheelchair bound from Parkinson’s. Replacing 1 step with a ramp adjacent to the driveway made all the difference for his wife to help him in and out of the house. The sincere gratitude from recipients like this make this a worthwhile endeavor. 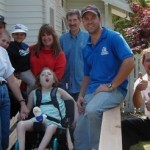 The 1920’s house in the University neighborhood had 4 steps into the front, side and back doors. The side door was chosen for most direct access without compromising the yard. The 12-year old girl with spina bifida not only got this ramp, but was overjoyed receiving an Aflac duck.
Previous slide Next slide 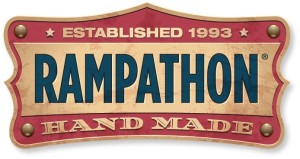